Mallorca is one of the most popular destinations in Spain. It is famous for its beaches and resorts, and it gets millions of visitors per year. However, most people are not aware that Mallorca has another side. Along the northwestern coast of the island runs the Serra de Tramuntana mountains.

Mallorca has a very long history, dating back to ancient times. There is evidence of settlements dating back to 6,000 BC, with evidence that both the Carthaginians and Romans at established colonies on the island.

The Serra de Tramuntana mountains along the northwest coast of the island have always been sparsely settled due to its rugged landscape and steep cliffs. This landscape has forced the inhabitants of the area to adapt and overcome the challenges of the land by building unique systems for water collection and terraced farming.

The area was designated a world heritage site for its small scale works designed to overcome the limitations imposed by their physical environment.

What to See and Do

The core of the world heritage site is centered around highway MA-10 which goes from the town of Andratx in the south to the town of Port de c in the north. The entire length of the road is approximately 125km and will take you approximately 3 hours to drive its entire length, not including any stops or side trips.

The highway will take you through winding mountain roads, so expect to travel slowly.

Assuming you are based in Palma where most of the hotels are located, you can easily get to Andratx via major highways, as well as quickly return to Palma from Port de Pollençac via the interior of the island.

The route of highway MA-10 through the Serra de Tramuntana

There are many locations to stop along the route to take in the breathtaking scenery. However, given the narrow nature of the roads, you cannot stop just anywhere. Most of the road, especially once you are deep in the mountains, has no shoulder and you cannot pull your car over to park. 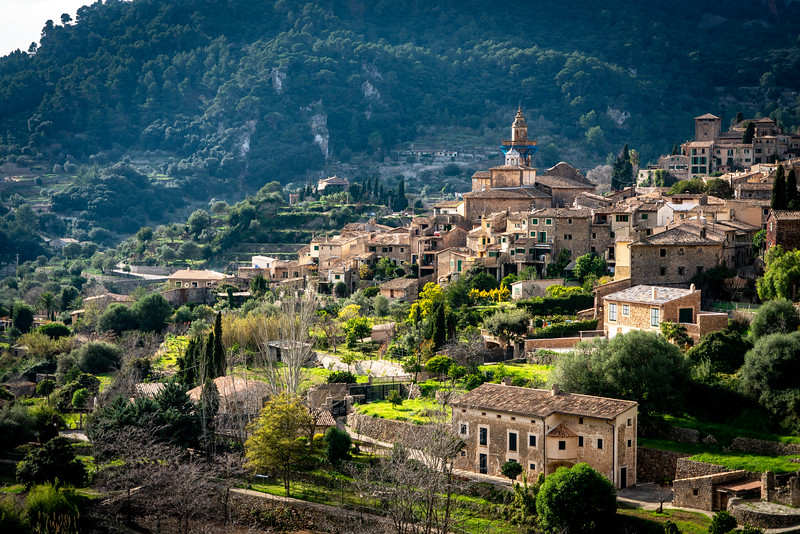 The Town of Valldemossa

The entire area is a playground for photographers. Here are some tips to get the most from your photos:

You will have no problem finding places to eat. If anything, you will have problems narrowing down your choices to just one.

Most of the cuisine in Mallorca will be typical Spanish fare. However, there are some dishes which are unique to the island which you should try. These include: 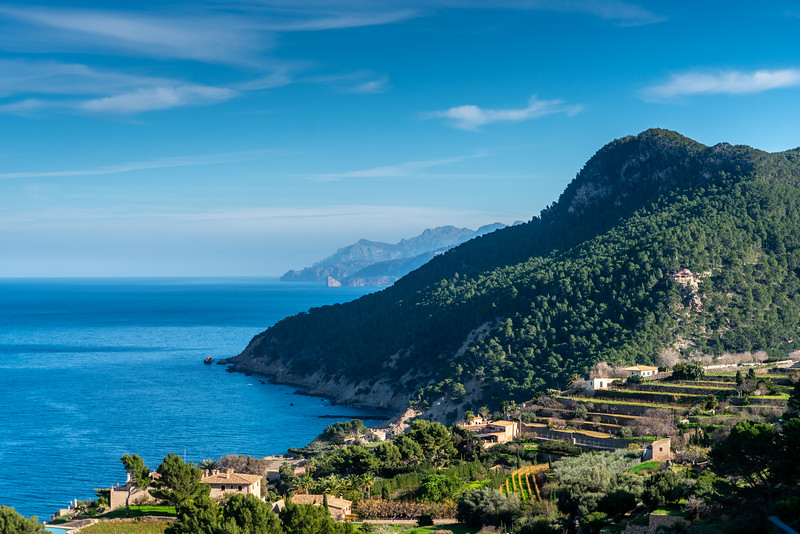 Along the northwestern coast of Mallorca

Given that tourism is by far the largest industry on the Mallorca, there are many dozens of options for lodging at every price point all over the island.

Within the Serra de Tramuntana area, there are fewer hotels as it doesn’t attract as many tourists. Nonetheless, there are places to stay. They tend to be smaller, more boutique properties that are not located on a beach.

If you wish to stay in mountains, look for properties in the following communities:

Staying in the Serra de Tramuntana area also gives you the opportunity to do home-stays and farm-stays (agroturismo).

Abandoned tower along the coast

How to get there

Palma de Mallorca Airport (PMI), is the main airport on the island and is located east of the city Palma. Note that if you rent a car at the airport to drive the Serra de Tramuntana, you will have to drive across or around the city.

Flight time from Barcelona to Palma is under one hour.

Most visitors to Mallorca might be able to get by without a car if they are staying at a resort. However, if you wish to explore the world heritage site, a vehicle is almost mandatory.

There are several car rental counters at the Palma Airport. You can also rent a car at several locations within the city of Palma itself. If you only wish to rent a car for a day trip, this will probably be your best option if you are staying in Palma.

There are car and passenger ferries that travel to Mallorca on a regular basis. The two ports for ferries are Alcúdia in the north and Palma in the south.

The most common departure point for the ferries is Barcelona, Denia, and Valencia. There is also a ferry from Toulon, France which travels three times a week.

Crossing time from both Barcelona and Valencia is approximately 8 hours.

There are also several ferries that travel between the Balearic Islands. These allow you to travel from Mallorca to Formentera, Ibiza, and Menorca.

Panorama of the Serra de Tramuntana in Mallorca

Mallorca is a popular tourist destination. Expect costs to vary seasonally depending on the number of tourists.

I visited in December and I found it to be very affordable. Hotel rooms were affordable and easy to get, even though not all hotels were open this time of year. Expect rates to rise dramatically in the summer.

You will find prices for food to be more reasonable in the towns along highway MA-10 as they get few tourists and mostly cater to locals.

Located in the middle of the Mediterranean Sea, Mallorca’s climate is very mild year around.

Expect high temperatures around 30C (86F) in the summer, with lows of 7C (45F) in the winter. Temperatures on Mallorca almost never dip below freezing, nor does it ever get stifling hot in the summer.

Gary has been traveing the world since 2007. His travels have taken him to over 200 countries and territories and 400 UNESCO World Heritage Sites.

He is a 3x Lowell Thomas Award winner and a 3x North American Travel Photographer of the Year.