The Ibiza, Biodiversity and Culture UNESCO World Heritage Site is a collection of four cultural and natural sites on the islands of Ibiza and Formentera.

It is unique among world heritage sites in that there is little which connects the sites together other than geography. The cultural sites represent totally different civilizations and periods of history, and the natural part of the site has no real connection to the cultural sites.

The four parts of the site are:

The only real connecting theme is the deep history of the island and many peoples who have lived and traded here.

What to See and Do

Each of the four different locations which constitute the world heritage site are unique and physically separate from each other. They are not difficult to visit and at worst will require a taxi ride from the main town center, and/or a short ferry ride to the island of Formentera.

Walls of the Fortress in the Old Town (Dalt Vila)

The town of Ibiza is dominated by the medieval fortified old town of Dalt Vila. The walls and fortifications date back to the Renaissance and are of Spanish and Italian design, but the street layout of the citadel dates back to the Phoenicians, Arabs, and Catalans.

The primary thing to do would be to walk along the walls of the fortification, which can probably be done in under 2 hours. There are several restuarants and small hotels within the walls of the old city.

There is a local tourism board information office where you can get maps of the area which list several walking routes you can take. There are also several guided tours which are offered.

The old city is easy walking distance from the museum and tombs of Puig des Molins.

The Necropolis of Puig des Molins

Puig des Molins consists of both the cemetery and the museum. To enter the tombs and cemetery you must buy a ticket to the museum.

The museum showcases the artifacts found at the necropolis from both the Carthaginian (Phoenician) and Roman periods. The museum displays are mostly in Spanish, however, there are text guides available in English.

Through the museum you can visit the Necropolis. There are several tombs you can enter where you can view the skeletal remains which were found. Many of the tombs have very narrow passageways which will require you to duck or crawl to enter. 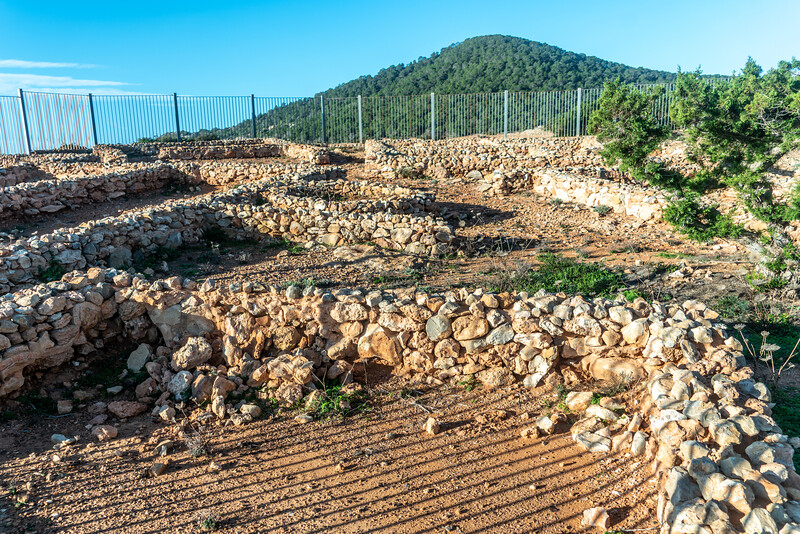 Sa Caleta is the ruins of an ancient Phoenician settlement. The entire site is surrounded by fencing and you can only see the site through the fencing.

The site dates back to approximately 650BC and was built as a fishing village.

The ruins of Sa Caleta shares its name with a nearby cove and fishing village. You can get to the ruins via Google Maps, but make sure you are going to the ruins, which is marked by a small castle icon, not just the cove. 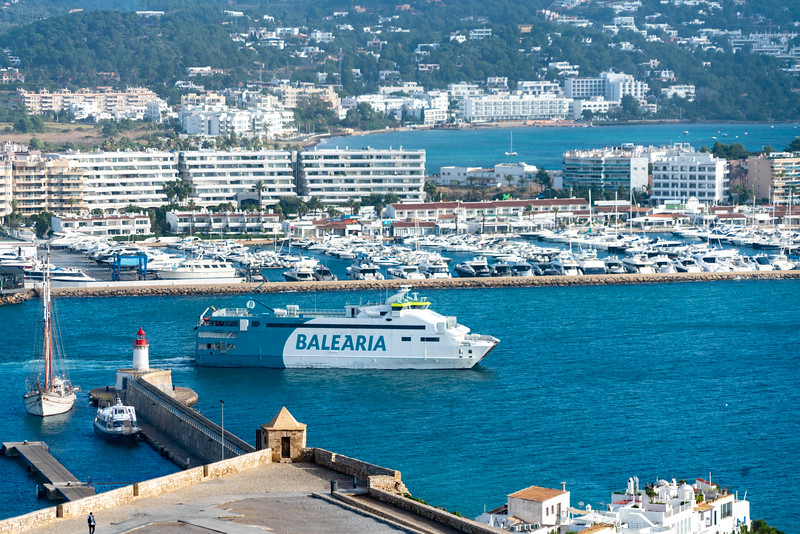 The natural parts of the world heritage site are completely separate from the other cultural sections and it is primarily located on the island of Formentera.

To visit the site you will have to take a ferry to Formentera and from there go to the northernmost part of the island. The area is quite popular as a beach destination. It is a very short taxi ride from the ferry port to the beach.

Each of the four properties which make up the world heritage sites is different, so there isn’t one set of photo tips that will work for all of them.

Walls of the Old Town Fortification

Dalt Vila (Old Town). You can get good shots along the walls of the fortress. Try to do so at sunset if possible as that when you will be most likely to get good light, given the position of the town on the island. Try to use cannons and other historic items as foreground props.

The Ruins of Sa Caleta

Sa Caleta. This is very difficult to photograph because it is all contained behind a fence, and you can’t usually enter the area. All your photos will have to be taken behind the fence. Likewise, the only thing there is to photograph are the stone outlines of buildings on the ground. Best you can do is to try to hold your camera over the fence. Unless you have a very small lens, trying to shoot between the grating of the fence will be difficult or impossible. 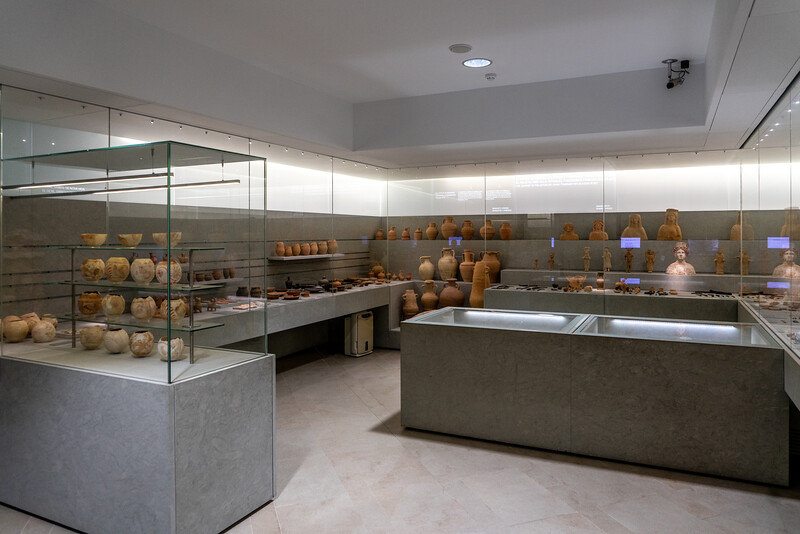 Inside the Puig des Molins Museum

Puig des Molins. You will probably spend most of your time in the museum. Outside the museum, you can see the various graves and tombs. The best photos will probably in be inside the tombs, which you may have to crawl or duck to enter.

Posidonia sites. Seagrass is, unfortunately, underwater. Unless you have an underwater camera, it will be difficult to photograph. Your best bet will be to photograph the coastal areas and the beaches, adjacent to where the seagrass sites are located.

You will have no problem finding places to eat. If anything, you will have problems narrowing down your choices to just one.

Most of the cuisine in Ibiza will be typical Spanish fare. However, there are some dishes which are unique to the island which you should try. These include:

Given that tourism is by far the largest industry on the Ibiza, there are many dozens of options for lodging at every price point all over the island.

Your best bet for exploring the world heritage site will be to get a room in the city of Ibiza, and preferably near the old town if you want to minimize walking distance.

Sarcophagi in the Necropolis of Puig des Molins

How to get there

The Ibiza Airport (IBZ), is the main airport on the island and is located west of the city Ibiza.

Flight time from Barcelona to Ibiza is under one hour.

You don’t have to rent a car to visit the world heritage prosperities on Ibiza. It would actually be cheaper to take a taxi to the sites which are located outside of the city center.

However, if you choose to drive, it would be easiest to pick up your car at the airport.

The Old Town and Puig des Molins should be visited on foot. It would be much easier than trying to find parking.

You can drive to Sa Caleta, but you will have to walk several hundred meters to the actual site. The site is only about 10-15 minutes from the airport.

Likewise, you can take a car ferry to Formentera, but it would be far easier and cheaper to take the ferry on foot as you don’t have to drive far on the island.

There are car and passenger ferries that travel to Ibiza on a regular basis. The primary port is in the city of Ibiza.

The most common mainland departure points for the ferries are Barcelona and Valencia.

There are also several ferries that travel between the Balearic Islands. These allow you to travel from Ibiza to Formentera and Mallorca. You can reach Menorca via Mallorca.

Ibiza is a popular tourist destination. Expect costs to vary seasonally depending on the number of tourists.

I visited in December and I found it to be very affordable. Hotel rooms were affordable and easy to get, even though not all hotels were open this time of year. Expect rates to rise dramatically in the summer.

Located in the middle of the Mediterranean Sea, Ibiza’s climate is very mild year-round.

Expect high temperatures around 30C (86F) in the summer, with lows of 7C (45F) in the winter. Temperatures on Ibiza almost never dip below freezing, nor does it ever get stifling hot in the summer.

Gary has been traveing the world since 2007. His travels have taken him to over 200 countries and territories and 400 UNESCO World Heritage Sites.

He is a 3x Lowell Thomas Award winner and a 3x North American Travel Photographer of the Year.